The other weekend I was in Brisbane with my sister.  We were there for different reasons but made the most of being there together at the same time and went shopping.

I now have a number of new additions, long overdue, to the wardrobe - cue a massive cull and donation to Lifeline.

While there, and waiting for the LOML to finish up his stint at the casino with his mates, we went to South Bank for dinner.

Oh how I miss Brisbane. 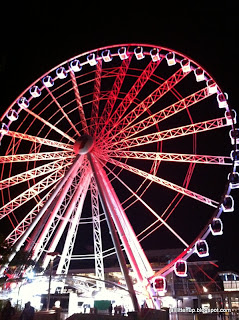 Hindsight is a wonderful thing and it is only since moving to a much smaller town (I can't kid myself and call it a city no matter the population count at last census) that has no concept of modernity (in the sense of opening beyond 6pm, on Sundays etc) and the wonderfullness that comes from embracing cultural diversity, that I am acutely aware of how much I took for granted when we lived there.

Oh to turn back the clock but retain what I know now - I would be out every night partaking of Turkish and Japanese and Italian and Spanish delicacies around the city....sigh.

But anyway, one day I'll win lotto and then I'll buy an apartment on the riverfront overlooking the bridge (the new years eve fireworks I tells ya!) and I'll live there and live it up.

In the meantime, I'll make sure I get there a whole lot more often than I currently do.