Week 3 already of my Cookbook Cookoff Challenge and I'm on fire!  Am totally enjoying the different meals I've already cooked from my cookbook collection and looking forward to the next.  Most new meals are happening on the weekend given that on a Saturday and Sunday I have not only the time, but also the inclination.

This week has seen the addition of another Donna Hay recipe - this one from her magazine - and a recipe-book version of Lasagne, rather than the made-up-on-the-go version that I usually go for!

Donna Hay's Cheesy Spring Onion Fritters were first up.  Nice and light and easy, I only needed to buy buttermilk - not something I usually cook with.  Everything else was already in the fridge.  I had to fudge a little since I don't like ricotta cheese (it's the smell....) so replaced it with cheddar.  Would no doubt have tasted much better with the ricotta but still tasted pretty damn fine without! 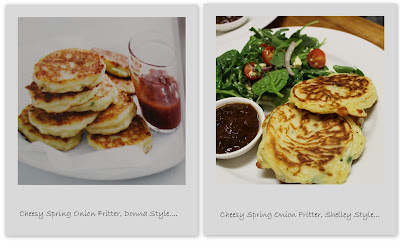 These little gems were incredibly light and fluffy, and very more-ish.  I served them with another summery-greekish salad (seems to be my signature these days!) and some homemade tomato relish.  I must say, I'm not sure if it was the Fritters or the tomato relish or a combination of them both, but this was just plain delicious!  Both Lucky Phil and I went back for seconds and  also polished off the few I had reserved for lunch the next day!!  I'll certainly now be rethinking the gifting of the final few bottles of tomato relish in the cupboard too....!

Second challenge of the week - good old Lasagne   I made this one on Sunday night in preparation for someone's 41st birthday on Tuesday (not mine).  The request for this special meal was submitted last week and of course, being a birthday night, how can one refuse!?!  So I figured, to fulfil the Cookbook Cookoff Challenge, why not make it from a recipe book?
.
I followed Stephanie Alexander's recipe from her tome The Cooks Companion.  I've often referred to this book when I have a glut of one form of veg or another and need some inspiration for the using up of it.  Stephanie's lasagne recipe didn't disappoint.  I made it on Sunday night for eating on Tuesday night to give the flavours time to develop and meld (the whole world knows that leftover lasagne tastes better than first night!). 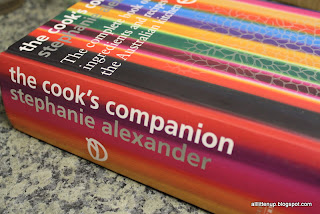 I had to do a bit of fudging on this one too - I didn't have any celery, or bacon, or white wine and instead did without the former and substituted with red wine for the latter (always plenty of that on hand!!!).  I seem to do a lot of fudging with my cooking, which hopefully isn't going against the grain of my Cookbook Cookoff goal.....but I figure that I'm making 'new' recipes rather than playing with different versions of my usual repertoire of six or so meals, so I'm safe. 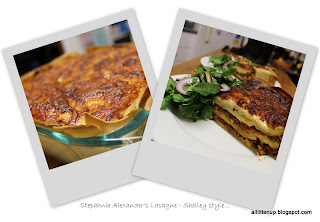 Anyway, birthday boy Lucky Phil was very impressed with the Lasagne.  But then he always is.  I figured out from a very early point in our relationship that he is happy with cheese on toast, anything more and he is ecstatic!  We demolished half of it last night - with a light salad on the side.  I was originally planning veggies but a) it was too hot   b) I didn't have time and c) I no longer had it in me to cook them by the time we were ready to eat.  Good thing the salad won out - there is no way I could have eaten my small share of the mammoth piece of lasagne I heated up had I done veggies!

Leftovers again tonight....looking forward to it.

The verdict on these two?
Will certainly make again.  There were other varieties of fritters to try - tuna and corn, sweet potato and pea, broccoli and bacon - will try to make sure I have all of the ingredients next time.  And as for the lasagne, Stephanie's recipe called for the addition of nutmeg to the mince mixture which I think made it sweeter.  Very nice indeed - and will be doing that one again too.