It's been so long since I was last in the blogosphere!  It feels like so much has changed!  Last I knew it was mid-October and my world was gearing up to be quite hectic....but nowhere did I imagine I would fall off the face of the inter-pla-net for near on 10 weeks!!!

So what have I been up to?  What has stopped me from my daily stalking and losing of hours via the internet???  Weeellllll, so glad you asked, let me give you an as-quick-as-I-can-in-one-longish-blog-post rundown....!

Around the end of October I'd finally wound down birth-day-week-fortnight celebrations in time for the startling realisation that my mum was also due for a birthday - hers of the significant milestone variety.  So I whipped up a cake and set to work decorating it.  Eventually, a week out from party-day, the grapevine alerted me that my aunt (cake-decorator extraordinaire whose cake decorating equipment I was gifted a couple of years back xxx) would be at the shindig.  EEEKKKK!  All of a sudden, designs and plans were reassessed in the cold hard light of a higher level of scrutiny and attention...I jest....but in truth, I did feel the pressure a little more.  I managed to complete mum's cake over the course of a week's worth of evening-after dinner sessions (I'm still working full-time in my admin job) and get it to my mum's house despite the rain on the day....and both mum and my aunt were suitably impressed with the results..!  Nice! 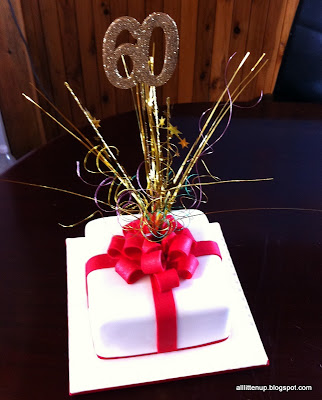 Around this time, I was also asked by my soon-to-be-bride sister and her husband if I would make their wedding cake.  Of course, the answer was always going to be YES but that didn't stop the stress levels climb to all sorts of new levels.  I mean, I've now done a fair few cakes - for fun and for celebrations - but nothing to this level.  After a flurry of text  and facebook messages (she lives two hours away), as well as a couple of face-to-face catchups in the middle, we came up with a design that both she and her fiance liked, and that I was confident I could pull off!  My biggest fear around this time was a request for a five tier masterpiece to rival the royal wedding!!!  So then I started....baking fruit cakes, making sugar roses, sourcing cake toppers and ribbon and the like....it's a big job when the pressure is on!

Around this time the weather was great.  Nice sunny days with not a hint of wet in the nightly forecast.  That was a big worry - that the rain would come and I would be in all sorts of bother.  Too damp/humid or too hot and the fondant icing melts...and given that my old queenslander house is not air-conditioned and has gaps and holes everywhere, a big concern.  But it held in the end and everything was made and assembled without a tear or a tantrum.  :)  I had a momentary panic on the afternoon before the wedding when came the realisation that the assembled cake (three tiers high) would not go into our car without the need to be tilted - not in this lifetime!!  Luckily mum was over viewing my creation (and giving much needed compliments) and volunteered the use of her little buzzbox (a Toyota Echo) to get it to the reception venue.  That there was only an inch to spare around the base board when the cake was in was by this time not an issue at all. LOL We delivered it safe and sound in the end and at the very moment when it was on the table in the reception room and I'd taken a photo as proof, I swear my blood pressure dropped considerably and I regained a load of much needed sanity!! 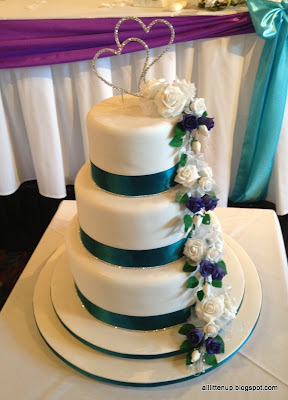 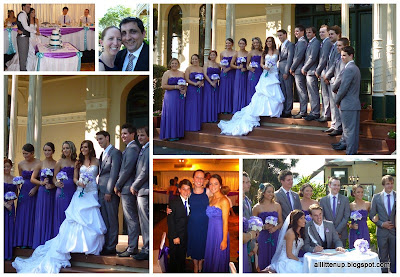 Around this time also, in fact the day before the big day, the LOML and I had signed up on a second casual store for Christmas.  To be opened in three days.  From scratch.  A big ask at any time of year but at Christmas time? Huge undertaking given that the madness of Christmas for giftware retailers begins back in September so that stock can be ordered and delivered in time for the start of the buying frenzy.  But we (the LOML) took it in our (his) stride.  Go hard or go home.  We have had two years of tough to get us to this position and we were not going to let an opportunity pass us by (this second store was in the 'premium' shopping centre in town - the BIG one).  So in two days we got it all set up - stocked, signed, staffed - all while I was still working full-time in my week-day admin job.  Insane now when I look back on it.
And so we continued until Christmas day - the LOML working everyday in either store, me working during the week at my job and then working in the evenings at either store merchandising stock or serving or both, both of us working all weekend in both stores (paying weekend wages hurts small businesses)....and then we stopped for one day (Christmas day) where we did nothing (I did the washing and swept the floor), got sick (always going to happen given the hours we were putting in), and then started all over again on Boxing Day....madness.

And so that's it..Christmas is done and dusted, the New Year has been and gone, and before we know it, we'll be bemoaning how quickly 2013 has disappeared and wondering what 2014 will bring!  I must say though, that I am looking forward to 2013.  2010 sucked, 2011 was worse but 2012 turned it around.  Life has been getting better each day so it figures that 2013 can't be anything but good.  Here's hoping. 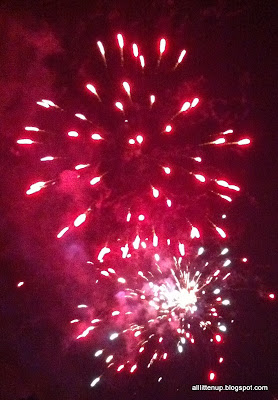 Happy New Year world!  Hope it promises to be grand for you also!
Posted by Shelley