So here we go, full swing ahead, into week 2 of my 2013 Cookbook Cookoff Challenge where I attempt to cook two meals a week from cookbooks that have been gathering dust on my shelf despite the occasional pull-down-dust-off that comes from engaging in a little food-porn.

This week, only one meal from the cookbook (really?!? breaking the rules on week 2??!!) however the Mediterranean Open Grill was inspired by our visit to our friend's cafe so chances are pretty high it did come from a recipe book, at one time.....and who knows, I may find it in one of my books up there on the shelf...so it counts!!

I made this one on Sunday night after we had driven to Brisbane to visit Mr Matt and partake of his fine food and good coffee in the gorgeous surroundings that are his inner-north cafe-gift shop.  Lucky Phil and I had an open grill each for lunch (with Greek salad on the side) and could have eaten it all over again except that would have made us pigs.  So instead, I waited until we got home and I made my own version.  Basil pesto, spinach leaves, red onion, fetta, sundried tomatoes, cheese.  All on a turkish roll cut in half then topped with a mozzarella-ey cheese mix and toasted until just right.  Heaven on a bread roll.  Finished with a thrown together Greek-ish salad, I reckon my version was better than that of the cafe.  Yes, Mr Matt, that's right.  Better LOL
The Bobotie Loaf however was a genuine, ridgey-dige recipe from The World of Spice by Michael Bateman.  I'm not sure how I came to have this book in my possession but it has the most amazing recipes (At this stage, to read.  Soon I can say, to eat) and pictures.  This one jumped out at me because I was craving meat but not enough to cook a steak.  It was super easy to make and the smells as it cooked were amazing.

It had a delicious sweet taste - I think from the apricot jam and raisins (I used sultanas - didn't have raisins).  It also had a touch of the familiar in the use of curry powder.  One of my big food memories as a child is dad's every-veggie-left-in-the-fridge-cooked-with-mince-flavoured-with-curry dish.  This one brought all those good memories right on back with every bite.  Feel good stuff that. 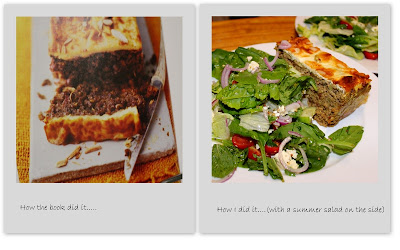 Like a lasagne though, first night everything fell apart when served up.  Second night though, perfecto.  Cut perfectly so it served so nicely, plus having had a day and night to mellow the flavours together, tasted even better than the first.  The recipe made lots too.  Almost too much for two people (eaten over three nights - nearly one night too many for any leftover no matter how tasty), it would certainly feed four or six adults in a hit.

Hmmmmm, should I be posting the recipes as well?  Not too sure, given the copyright laws of the world.  I mean, I paid good money for these cook books so that the authors could be reimbursed for their knowledge and skill....I've read that by re-writing the recipe in my own words and attributing credit I shouldn't be breaking copyright law but I don't know....

One thing I do know is that I will be seriously peeved if ever the cookbook goes a-missing and here I've gone and posted about how great the recipe was and I won't be able to make it again.....thoughts????