Operation Matron Dress: The Wrap Up

Months of lead up preparations, more-than-was-necessary pre-wedding dramas, plenty of sugar icing and then in the space of 8 hours, it was all done and dusted.

It was a lovely day.  The weather couldn't have been more perfect.  Considering the TV forecasters kept saying late thunderstorms for Saturday afternoon, the gods of thunder heeded the unspoken 'don't you dares' from many a guest and more so from my bride.

There were a few....relatively minor.....potential hiccups....that were resolved with plenty of time to spare but by the stage they came in, I was expecting them.  This wedding hasn't, after all, run as smoothly as it should have in the planning stage!

On Friday night, after having finished the icing of the cake with nary an incident to be had, I was partaking of a few glasses of red to celebrate.  That's when I got the phone call.  I was a little tipsy (it was late after all!) and overly joyous so the nature of the call didn't really sink in until I was off the  phone.  And then, all I could do was laugh in a 'what else' sort of way.  It turned out that one of the cars to be used in the wedding (the one that was going to transport me, the DIL bridesmaid and two page boys to the ceremony) had broken down and could my car be used?  Oh, and could I drive it?  See, I had to laugh.

'Sure!  No worries at all!' I exclaimed in a fantastic display of pretend sobriety and heartfelt support.  My bride did not need to be stressing about this!  What this meant of course, was that I now had to clean my car before the wedding.  I need to stress here that my car is filthy.  Both inside and out.  All the time.  My car is a workhorse and isn't pretty.  Hence, instead of leisurely taking the cake to the reception hall and then casually getting ready, my morning was instead filled with giving  the car the best, quickest once-over I could in a limited timeframe.  Enough to pass a casual inspection, enough to not make our pretty clothes dirty!

With the car cleaned, I then had to take the cake to the reception hall.  Easy enough you would think.  I got the cakes (two separate tiers) safely into the back of the car - negotiating the back steps was my biggest concern.  Our back steps can be likened to a ladder leaning against a wall - very steep with handrails that are merely cosmetic - hang on to them at your peril!  But I got down them safely and stowed the cakes.  Then to the reception hall....

I had been told that people would be there all morning setting up and getting ready.  When I got there, not a person to be seen.  Doors locked, lights out.  Nothing.  I rang my bride who then rang her husband-to-be who then rang the person with the key.  He'd be there in twenty minutes.  'No worries' I told myself, 'Plenty of time.'

Forty-five minutes later I was getting restless.  I had two cakes in the car, in the sun.  I needed to get into this hall.  I called my bride again in a little bit of a panic and asked where this person was, is he still coming and if not, did the priest lived nearby and would he have a key?  She was onto it.  I won't repeat what went through my head when not two minutes later the priest walked FROM NEXT DOOR to unlock the hall for me.  It wasn't at all appropriate mind-thoughts for church grounds and I may be now going to hell. 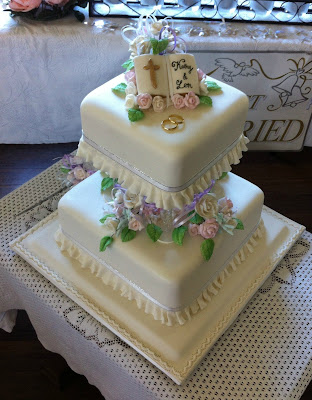 But anyway....by this point I was on a sugar low having not eaten for hours so my hands were incredibly shaky.  And I now had to construct my cake masterpiece....without dropping it.  A few deep breaths, some mental pepping-up and the deed was done, and even easier than I was expecting.  All good.  Then it was off to get ready.

And from then on all went well.  We got to the church on time (to the minute), the service was lovely (the priest was Scottish.  I could have listened to him talk all day.  He could have been reading tax legislation for all I knew but I could have listened all day), the weather stayed perfect for the photos and then the reception went off without a hitch.  My bride couldn't have asked for more. 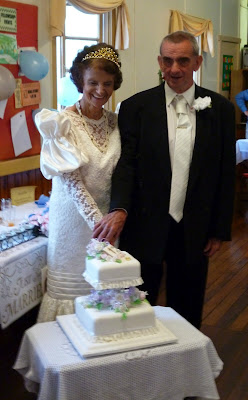 As for me, the dress still fitted and looked good (when I remembered to suck my guts in), my friend Miss K did a great job on make-up and hair and I was looking hot-to-trot (so to speak).  I got a lot of really wonderful feedback on the cake and have a couple of future jobs lined up as a result (gotta love weddings for networking!).

Given that a great percentage of the people at the wedding were, how to put this politically correct, older, it was all over by 7:30pm.  I can't say I was disappointed because by then I was exhausted!  And my bride looked even more tired than me!  I think I was in bed and asleep not long after I got home.  And I slept the sleep of the dead last night.  Exhausted.

And now it's all finished.  My bride has started her new chapter with her new husband and is living her happily ever after....awwww.


And, despite how this wedding has turned out, if in the future, for whichever bride I am making a cake for, I am ever asked again to step up and fill some Matron/Bridesmaid type shoes (particularly for someone I don't really know that well, especially if I don't know anyone other than the bride and groom in the bridal party), I shall politely, nicely, gently decline.  I just don't think I have it in me again!!